The name, taken from William Shakespeare’s A Midsummer Night’s Dream, pays homage to Oberon the King of the Faeries; a tribute, also, to the magical green fairy (la fée verte) of absinthe lore.

Our vision:
Working from an amalgamation of historic recipes, we began building Oberon Absinthe Superieure with the same desire to bring back the historic spirit’s flavors much like we did for Morewood’s Usquebaugh. Unlike Morewood’s, however, we added much more of our own preferences and desires into this absinthe as a nod to the historic recipes of old and then driving them forward into the future with a more floral and botanical profile to the flavors imparted. Akin to the recipe design of new world gins, we intentionally backed off on the anise seed and star anise flavors, opting to build on the bouquet of botanical complexity just beneath the surface of anise forward absinthes.

The mythology:
Absinthe is steeped in rumour, myth, and taboos. From the early to mid 1900’s until 2007, the sale of Absinthe in the United States was restricted based on interpretation of FDA regulations requiring products to be thujone-free (thujone is the active ingredient in wormwood). In October 2007, the TTB (Department of the Treasury, Alcohol and Tobacco Tax and Trade Bureau) issued an industry circular based on new FDA standards around thujone-free labeling, allowing sale of absinthes in the U.S. once again. Due to its illicit and misunderstood history, we have seen a resurgence in popularity of the spirit. Often associated with artists and poets of the early 20th century, and purported to incite hallucinations, the connection to wormwood has been greatly overstated as there is very little scientific evidence to support hallucinogenic effects. These rumours of absinthe’s secondary effect are most likely traced to either illicit and undeclared ingredients added to absinthes of the time, or to simultaneous social use of drugs unconnected with the spirit itself. While noting the truth around the spirit that it won’t cause you to hallucinate, we are still fond of the romance around the era and find that recreating the spirit today brings us back to the more artistic side of society and historic nostalgia for times long before us.

Our process:
We begin by macerating a high-proof rye spirit base with the traditional, all natural ingredients of wormwood, fennel, and anise seed, along with hyssop, angelica root, peppermint, star anise, and coriander. This primary maceration is then distilled in our 26 gallon copper pot alembic style Hoga still, after which we then move into the secondary maceration of botanicals. This secondary maceration is where absinthe obtains its distinctive and initially vibrant color. During the secondary maceration, Oberon Absinthe takes on a deep emerald green color provided by the chlorophyll leached from the botanicals. However, by the time the bottle reaches you, the chlorophyll will begin breaking down as a result of exposure to light and time. During this process, the color will begin to resemble the characteristic autumn leaf (also known as dead leaf or feuille morte) tones found only in absinthes like ours that use all natural ingredients. This change in colour is fully expected and normal during bottle conditioning, and won’t impact the flavour of the spirit negatively, thought the subtleties of the botanicals will become more married and soft.

How to drink it:

Traditionally:
Pour an ounce to an ounce and a half of Oberon Absinthe Superieure into a glass. Place your absinthe spoon over the glass with a sugar cube on top. Slowly drip 3 to 6 ounces of ice water on to the sugar cube and allow to drip into the glass gradually. This process will cause the absinthe to louche (cloud) as the sugar and ice water combine with the absinthe. When your desired amount of water has been imparted into the glass, use the absinthe spoon to further dissolve the sugar by stirring. Lastly, consume slowly (and if you feel inspired: begin writing poetry, engage in interpretive dance, or painting surrealist imagery).

Tasting notes:
Proofed at 140 (70% alcohol by volume), Oberon Absinthe Superieure is designed to allow you to dilute to your personal preference; supporting a big, concentrated profile, or a much more subdued and subtle impression of complexities. With its distinctive black-licorice flavor imparted by the use of anise seed and fennel, the wormwood imparts a mild bitterness that is balanced by the sweetness and citric notes of the lemon balm. As a result of backing off on the heavy anise notes of some more commercial absinthes on the market today, the louche effect is also reduced to a mild clouding, but with the benefit of the deeper botanical and floral notes coming more forward on the palate and nose. 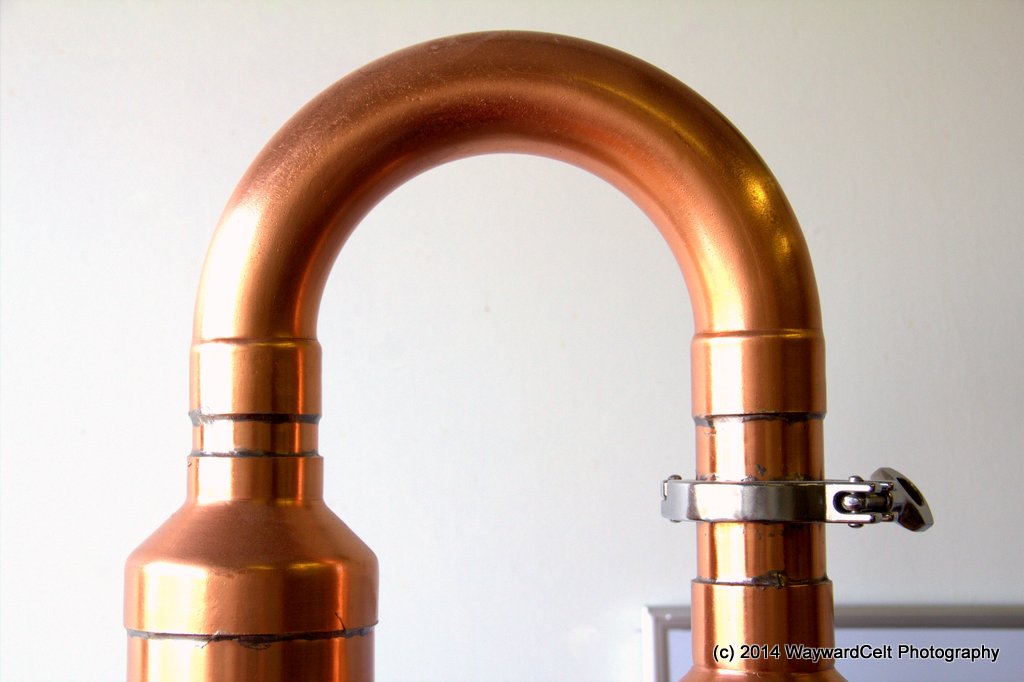